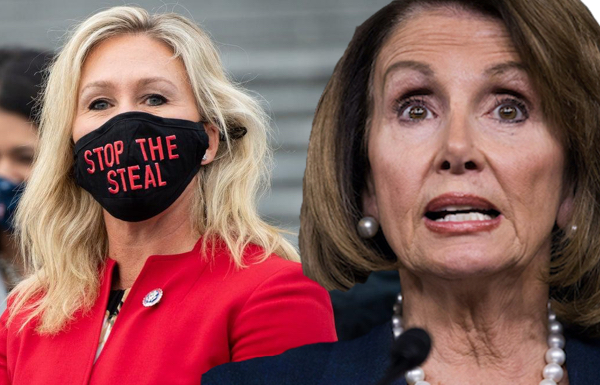 That seems to be more appropriate than investigating someone who hurts someone’s feelings like Dr. Seuss and peanut butter and jelly sandwiches.

President Trump offered Pelosi 10,000 National Guard troops to Pelosi who declined the offer, yet they blame Trump for the violence.

But, if you are inciting violence why would you offer 10,000 troops to ensure there is no violence. And why did Pelosi turn down the offer if she was convinced that Trump was going to have his followers commit violence?

Greene had confronted AOC in the hallway over her refusal to debate the New Green Deal and her support for Islamic terrorists abroad and domestic terrorists Antifa and BLM right here at home.

Pelosi claims it frightened AOC but then again this is a woman who says she was afraid for her life from rioters who were never in the same building that she was in.

How about the fear AOC has spread using fake global warming “facts’ in order to make people believe that the world is ending tomorrow if we don’t immediately spend 93 trillion dollars?

Or any number of other liberal fear-mongering causes. People weren’t afraid of global warming, they were scared to death that government would spend 93 trillion dollars on her nonsense.

Rep Greene is in a unique position since she was booted off of every committee. She can now spend much more time debating asinine liberal issues.

Couple that with the fact she refuses to be cowed by the cancel culture and she is very dangerous for the socialist Democrats. They really can’t do much to her so she can attack at will. And at Pelosi and AOC too.

Confronting a fellow member on their positions is now abusive according to Pelosi.

Democrats fear Rep. Greene because she is not your typical Republican who folds when the wind changes direction.

On Friday morning Taylor-Greene responded to Speaker Pelosi by calling for an investigation on leaving the US Capitol defenseless when President Trump requested National Guard to protect the US Capitol on January 6.

Pelosi left the Capitol defenseless.
After she was warned.