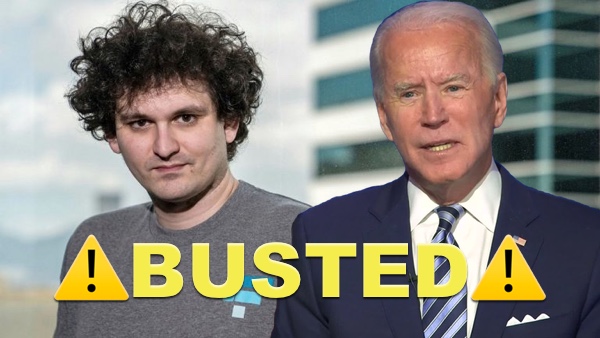 If you haven’t already heard, there’s a lot of controversy going on right now in the world of cryptocurrency and specifically the company known as FTX.

FTX has been the company when it comes to representing the crypto-currency market. They have been able to recruit people like Stephen Curry and Tom Brady as well as having their logo even placed on jackets and shirts that are worn by Major League Baseball umpires. They’ve been throwing a lot of money around, in fact, they’ve been throwing it at more than just places like major league baseball. They are actually the second highest donor to Democrats being right behind George Soros himself.

But the spotlight that has been growing on FTX in the past week or two is Spotlight that they do not want. The company is on the brink of bankruptcy after a massive crash in the crypto-currency market.

In fact, the CEO of FTX, Sam Bankman-Fried has lost approximately 95% of his wealth.

According to Daily Caller,

Sam Bankman-Fried, prolific Democratic donor and ex-CEO of now-bankrupt cryptocurrency exchange FTX, funded the campaigns of members of Congress overseeing the Commodity Futures Trading Commission (CFTC), one of the key bodies tasked with regulating the crypto industry and the subject of Bankman-Fried’s aggressive lobbying.

Bankman-Fried’s FTX is currently under investigation by the CFTC and the Securities and Exchange Commission (SEC) after Bankman-Fried allegedly moved $10 billion in client assets from his crypto exchange to his trading firm Alameda Research, and a liquidity crisis at his exchange which prompted the company to file for bankruptcy. However, prior to the agency’s probe, Bankman-Fried aggressively courted the CFTC – and funded several key lawmakers charged with overseeing the agency, pouring cash into their campaign coffers.

But here’s what’s really interesting about this. Remember all of that money that supposedly went to Ukraine that we couldn’t track? Well, Bankman-Fried admitted that the United States has been using FTX to transfer money to Ukraine and even laundered it back to Democrats in the U.S.

Even the Washington Post reported on Ukraine using crypto:

The Ukrainian government has gathered more than $42 million in cryptocurrency donations since Saturday, plus digital artwork including a limited edition worth roughly $200,000, according to blockchain analytics firm Elliptic. The challenge is how the country cashes in on these assets to fund its war needs.

Amid the Russian invasion of Ukraine, the CEO of FTX, Sam Bankman Fried has come forward to help a crypto donation project. He humbly announced that FTX will be supporting the Ukrainian Ministry of Finance and other communities in collecting crypto donations for the country. The Ukrainian government has received over $60 million in crypto donations from all over the world.

FTX’s CEO, Sam Bankman Fried highlighted that the war in Ukraine has been dragging on. The country is in full need of humanitarian help and access to global financial infrastructure. He also called attention to sanctions and crypto during this kind of situation. He indicated that crypto exchanges should enforce sanctions announced by the government seriously.

FTX has stressed across all of its regulatory and policy efforts, active coordination and communication with regulators and policymakers is crucial to ensuring that laws and rules achieve their intended outcome, reads a letter by FTX.