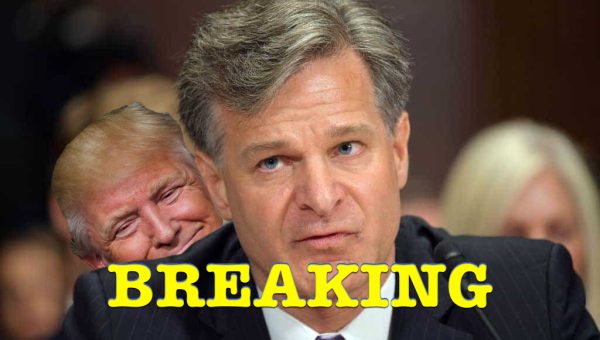 Before we expose Wray and his Democrat masters in their efforts to sabotage President Trump and the effort to restore American greatness and resist a ‘great reset’, it must be noted that the only reason that Wray is even in power is Donald Trump.

While I love President Trump and do believe that he did what he thought was best for America, it must be noted that he appointed Wray to his current post.

Trump was too trusting in his first term and we can only pray that he has learned that he can not trust a single sole from the swamp if he is going to be POTUS again.

A fish rots from the head down.

According to FBI whistleblowers Chris Wray personally removed concerns by rank-and-file members that the agency had become too politicized in deciding which cases to open.

FBI agents made this complaint to Senate Judiciary Committee members.

BREAKING: FBI Director Christopher Wray allegedly removed concerns raised by rank-and-file agents from this year’s final report by the FBI’s Special Agents Advisory Committee (SAAC) about FBI leadership becoming “too politicized” in deciding which cases to open and which investigations to pursue, FBI whistleblowers have told the Senate Judiciary Committee. The SAAC Executive Council, representing more than 10,000 agents from the bureau’s field offices, holds its meetings with the director at FBI headquarters twice a year.

For 6 years, the FBI has been falsifying evidence or suppressing exculpatory evidence to frame Trump targets; destroying evidence that would incriminate the bureau; lying to both the IG and Congress; spying based on fraudulent warrants; opening investigations based on false pretenses; criminally leaking classified intercepts to the media; spreading false propaganda; and conducting corrupt searches and seizures.

Yet no one is in jail for any of it.

Biden family whistleblower announced last week that it was top FBI official Tim Thibault who buried the information he gave the bureau on the Biden Family criminal acts.