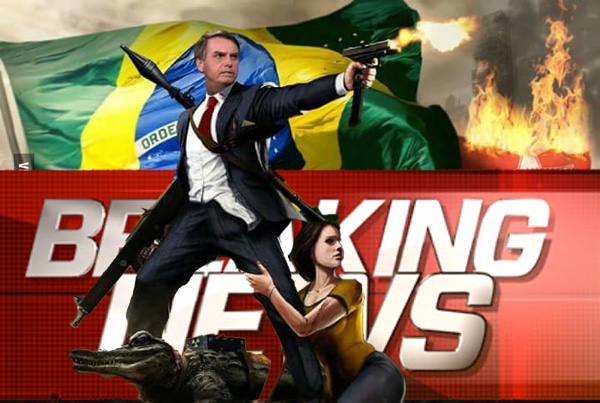 Valiant News reported yesterday that Brazilians took to the streets in massive numbers to express their disapproval with the results of their presidential election with demands that the military be mobilized to remedy what they believe was a “stolen” election.

BRAZIL: Hundreds in Belém do Pará call Brazilians to join the ‘fight for freedom’ and against what they call a ‘criminal and his gang’, in reference of new president-elect Lula, a far left politician already sentenced for time in prison for corruption. pic.twitter.com/fq7zL1USMZ

According to the official results, Bolsonaro lost to da Silva by less than two percentage points, the smallest margin in the history of modern Brazil.

The purported defeat also came after months of Bolsonaro sparring with election officials and the private company behind Brazil’s digital-only elections.

BREAKING: Truck drivers in Brazil close the country's main highways in protest of the election results 🚨 🚨 🚨

With civil tensions rising, the president made remarks and announced that his supporters felt like they had been dealt an injustice and called for peaceful demonstrations. However, Bolsonaro came up short conceding the race.

Millions of patriots in every street of Brazil are asking the military leaders to arrest Lula: "We will not allow a corrupt criminal to rule us!" The greatest mass demonstration in history. pic.twitter.com/If77vKM9k0

Even despite his lack of concession, his Chief of Staff then took to the podium to tell the public that Bolsonaro authorized the presidential transition process.

BOLSONARO: ‘It is an honor to be the leader of millions of Brazilians, who like me, defend economic freedom, religious freedom, freedom of speech, honesty and the green and yellow colors of our flag.’#Brazil #Eleicoes2022 pic.twitter.com/bLgy9ZUMmB

Separate reports say that the Brazilian people scheduled a “mega demonstration” on Wednesday in front of the Brazilian army barracks.

Brazilian patriots besiege the military command in Rio de Janeiro. They ask the military leaders to arrest Lula: “We will not allow a corrupt criminal to rule us!” Mass protests across Brazil. pic.twitter.com/z5DSVbOFhI

As of now, hundreds of thousands of pro-Bolsonaro protestors appear to be expressing their grievances with the election results in the streets of Brazil.

Shit is getting real in Brazil. pic.twitter.com/LhpgoDGIAG

Subsequent reports have surfaced indicating that YouTube has been censoring any questions regarding the results of the Brazilian presidential election, Fox News host Tucker Carlson revealed last night.