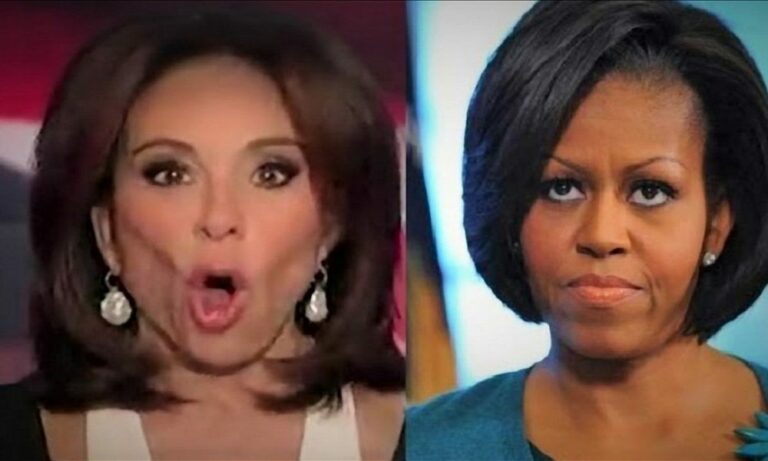 In Case You Missed it, this was from a while back … & is part of why the left is coming for Judge Pirro … Apparently her stellar ratings are enough protection to keep the wolves at bay … FOR NOW.  We wanted to revisit this to help restore your faith in journalism and the fact that there are still people on our team who are not afraid of the speech police.  People who are willing to ‘speak the truth, even if your voice shakes.‘ ….

| Michelle Obama was interviewed by Oprah Winfrey back in December, and it came as no surprise during the interview when she began bashing President Donald Trump.

She made numerous disrespectful comments, even saying that the United States of America as “lost hope” since President Trump won the 2016 Presidential Election.

The problem for Michelle Obama? Judge Jeanine Pirro had something to say about her sickening comments. She had enough of Michelle Obama’s unneeded comments and wasn’t afraid to let the world know exactly how she felt.

Michelle Obama was quoted saying “see, now, we are feeing what not having hope feels like.

You know. Hope is necessary. It’s a necessary concept and Barack didn’t just talk about hope because he thought it was a nice slogan to get votes. He and I and so many believe, what else do you have when you do not have hope?”

On the contrary, Michelle, President Trump has given our country to hope we had been missing for eight long years. Trump is a man who has been working for decades to make the world a better place for everyone, and for Michelle Obama to claim that with Trump in charge there is no hope is completely ludicrous.

She stated “you lived a life few can even imagine at the citadel of power and prestige in the world. You and your husband, blessed by God, and the American people, with the unique and historic opportunity to not only lead America from that shining place on the hill but impact Americans and give them hope virtually no others can. Now that you’re leaving, hope is gone?”

This was the harsh reality that Michelle Obama needed to hear.

Judge Pirro went on to say “hope is when people, 30 thousand at a time stand in line in the cold with their children hoping to get a glimpse of a man they think can change the course of their lives from the downward spiral that you and mister hope and change have put them on. I’ll tell you what hope and change is. Hope and change is when people show up 20 thousand strong after an election- desperate to see the man who actually brought back jobs to almost a thousand people when your husband said it was impossible.”

I couldn’t have said it better myself, Judge Pirro. How can Michelle and Barack be so ignorant to think that Americans wouldn’t eventually start seeing through their facades?

The video below shows Judge Pirro explaining her point of view on Michelle’s comments… and she certainly didn’t hold back.

As you can see, it’s pretty clear that Michelle Obama has a very skewed reality of what life is really like.

For her to think that she can go around telling the people of America how they should be feeling is complete bullsh*t.

President Trump restored hope for America when he was elected President of the United States.

After eight years under a hateful man like former President Barack Obama, it was extremely refreshing to have a man who could deliver real results come into the White House.

Maybe Michelle Obama will think before she says something so ignorant again… but probably not.

Trump turning America and perhaps just as importantly, sentiment among the people around.  Biden has since destroyed this confidence in the country.  A recent polls showed that 70% of Americans thought that the nation was on the wrong track right now.  This is well in line with Biden’s approval ratings.

Say what you will about Trump, admittedly the man was far from perfect, but I do believe that the decisions he made were what he truly believed were right for the nation.  I do not think Trump made policy based on personal benefit.  It’s sad to say, but this puts him head and shoulders above any past president, in the last few decades at least …

Let’s pray that Pirro, Carlson and others continue to tell the truth, regardless of the constant pressure they are under to sell out.  Let’s let them know ee have their backs!