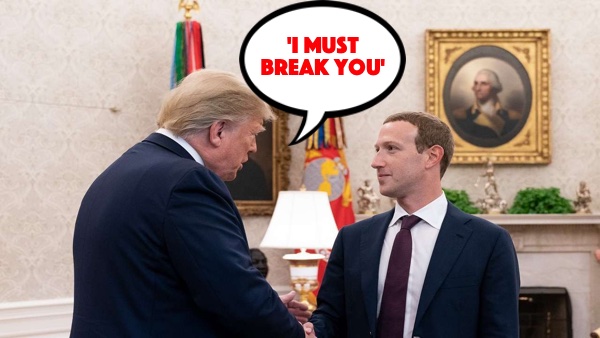 Facebook is perhaps the least trustworthy, moral and ethical company to exist in the modern era.

While they fall short of the deeds committed by corporations like IBM during the rise of the 3rd Reich, I do not doubt for a moment that, if given the opportunity, Zuckerberg would have gladly indulged Hitler in any tyranny request he made had he thought it would further his ends.

Zuckerberg and Sandberg along with their crew of criminals at Facebook have swindled countless people out of millions upon millions of dollars through immoral and illegal business dealings.

We were taken for over $300,000 ourselves in now unless ‘Page Like Ads’ the fraudulent platform sold us, only to turn around and render the ten million or so fans we had advertised for through Facebook’s platform.

It would be one thing if the Zuck did this just to cut us out and make more money for himself. The saddest part is that is destroyed not only our business, but Facebook’s as well …..

Jim Hoft, the founder of The Gateway Pundit and fellow victim of Zuckerberg’s criminal activity writes:

Mark Zuckerberg is a villain who has done more than any person in history to censor free speech and silence truth.

The Gateway Pundit previously reported in May that Missouri Attorney General Eric Schmitt, along with Louisiana Attorney General Jeff Landry, filed a lawsuit (Missouri v. Biden) against the Biden Administration, including Biden himself, Anthony Fauci, the Department of Homeland Security, and nearly a dozen federal agencies and Secretaries.

The suit alleges a massive coordinated effort by the Deep State to work with Big Tech to censor and manipulate Americans – from average citizens to news outlets – on issues including the Hunter Biden Laptop from Hell, 2020 Election Integrity, COVID-19 origin and extent skepticism, COVID-19 vaccine skepticism, among other issues.

Facebook has been censoring conservative voices and the truth from reaching the masses for several years now.

Mark Zuckerberg and Facebook eliminated up to 93% of traffic to top Pro-Trump websites following the 2016 election.

The Gateway Pundit’s Jim Hoft testified to Congress on the oppressive Facebook policies back in 2018.

Nothing is off limits for Zuckerberg and Facebook, not even Christmas.

Zuckerberg has made billions while silencing people around the world who hold opposing viewpoints.

Now this — Mark Zuckerberg’s wealth was cut in half this year following the launch of Meta.

Mark Zuckerberg’s wealth has plummeted by $71 billion this year – more than any other billionaire tracked by Bloomberg’s ratings.

The economic headwinds meant that Zuckerberg was ranked 20th among global billionaires – his lowest spot since 2014.

Zuckerberg was placed below three Waltons, and two members of the Koch family.

The New York-born billionaire has seen his fortune steadily slip away since he launched Meta, Facebook’s parent company, in October 2021.

Zuckerberg himself has come under intense scrutiny for his policies on content – first, during the 2016 election, with the Cambridge Analytica scandal, and then with battles over censorship and content monitoring.

He has been called to testify before Congress, with Republicans accusing him of censorship and Democrats saying he did not do enough.