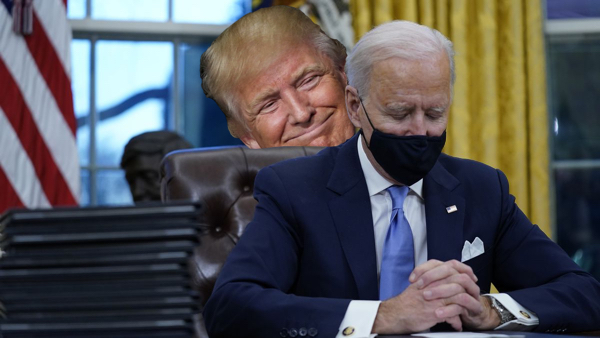 ICYMI, The courts are our last line of defense against the tyranny and luckily some are still pure …

A federal appellate court on Thursday ruled that Biden’s racist policy of banning whites from receiving aid money from the $1.9 trillion dollars Covid relief bill. Biden and his caliphate had decreed that only minorities were eligible for the aid money.

But, they are not worried, they will still give minorities the bulk of the money. You can take that to the bank.

Glenn Greenwald reported on his Substack that the Sixth Circuit Court of Appeals ruled that banning whites violated their Fourteenth Amendment rights.

They are to be afforded equal protection under the law. For some reason, people believe that banning Blacks and Hispanics is a travesty but banning whites is never considered racist.

“The specific provision struck down was part of the law’s $29 billion Restaurant Revitalization Fund grant program for small, privately owned restaurants struggling to meet payroll and rent due to the COVID crisis.”

“The law, which was passed almost entirely by a party-line vote in March, grants priority status to restaurants that have 51% ownership or more composed of specific racial and ethnic groups as well as women.”

“By effectively relegating struggling businesses owned by white males or ethnicities and nationalities excluded from a priority designation ‘to the back of the line,’ the COVID relief program, ruled the court by a 2-1 decision, ran afoul of core constitutional guarantees.”

The problem is that they have limited funds and so after all of the minorities get their money, whites have to wait and see if there is any money left for them.

One man co-owns a restaurant with his wife who is Hispanic but because she owns 50% of the business and not 51% she was not allowed to be considered.

Judge Amul Thapar, who was appointed by President Donald Trump to the appellate court and who wrote the majority opinion in this case, called out the government for its “scattershot approach” to determining who qualified as a “socially and economically disadvantaged” group.

“[I]ndividuals who trace their ancestry to Pakistan and India qualify for special treatment. But those from Afghanistan, Iran, and Iraq do not. Those from China, Japan, and Hong Kong all qualify. But those from Tunisia, Libya, and Morocco do not,” he wrote.