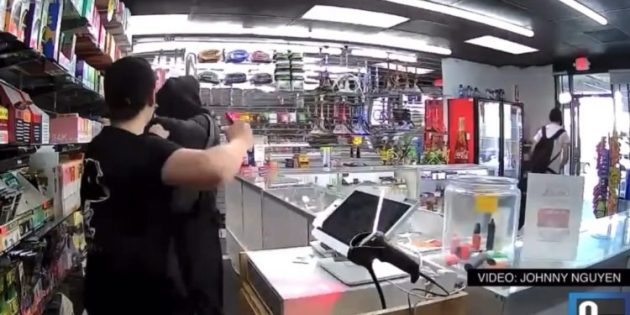 A smoke shop owner in Las Vegas had two men enter his store with full masks covering their faces. One of them grabbed a jar containing the tips for the day and the owner asked to keep the change from the jar when the second man jumped over the counter. The owner, Johnny Nguyen, was ready with a knife he kept next to the cash register. Even though he was scared he took it to the thief.

All told, he stabbed the robber seven times. He drug the man over to the front door and he called the police. After the attack, the would-be thief cried out, “I’m dead. I’m dead.” His partner ran out of the shop. With the Democrats out to kill the Second Amendment, shop owners are now arming themselves with knives that could put them in danger against a gun.

“I honestly don’t recall what I was thinking,” Nguyen told KSNV. “I assumed they had guns on them.”

Nguyen revealed that he plans to purchase a gun for the store in the event that his store is robbed again.

“I don’t know who they’re friends with, maybe they want to come back and do something else, so I just must stay vigilant,” Nguyen said.

Nguyen told KLAS-TV, “I don’t think he planned on getting stabbed that day obviously, but if you try robbing a store you are taking a risk. This is a small business obviously.”

Las Vegas Metropolitan Police said they had arrested two juveniles involved in the attempted robbery of the Smokestrom Smoke Shop in Las Vegas.

The would-be robber was taken to a local hospital after the foiled robbery attempt. Authorities did not reveal the health of the would-be thief who was stabbed.

Nguyen said that he had gotten scared because the two were wearing baggy clothes and one man had a bag that could have held a gun. But, I’ll bet he wasn’t half as scared as the robber who made the hasty retreat after his partner was stabbed. But, once again, the good guy won.