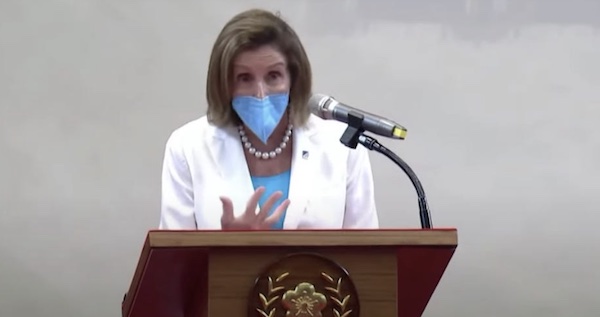 As you know the world is on the edge of it’s seat as the octogenarian Speaker of The House, Nancy Pelosi, visits Taiwan amidst China’s threats that the Biden administration’s actions may very well trigger WW3.

Instead of exuding confidence in the United States and her allies, Pelosi made a complete fool of herself, babbling incoherently, signaling to the CCP that the inmates are in deed running the asylum …

Speaker Nancy Pelosi flew into Taipei on Tuesday after weeks of international speculation and threats of retaliation from the Chinese Communist Party.

Pelosi was the first US House Speaker to visit Taiwan since Newt Gingrich in 1997.

Much has changed since then including America’s embarrassing loss and surrender to the Taliban terrorists in Afghanistan last year under Joe Biden.

Pelosi’s visit took her crime family and insider trading out of the headlines for a few days.

On Wednesday Nancy Pelosi gave a speech to the Taiwanese where she started babbling in confusion.

Pelosi went off script and started talking about President “Benjamin Franklin” who was an inventor and statesman but never a president.

I had to find the video of Pelosi, omg

we are not in good hands pic.twitter.com/OOrUeJfPUe

…. Buckle up and hand on tight!