BREAKING: WHAT ARE THEY HIDING? What The Election Works Are Doing In Front Of The World is Pure TYRANY! 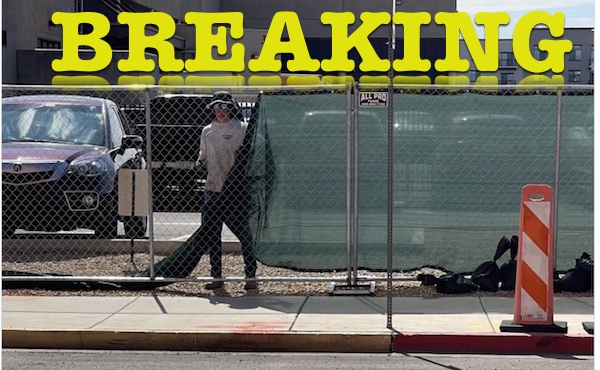 Somehow in the last few years we have gotten to the point where the powers that be are willing to go to such blatantly tyrannical extremes like this, for the whole world to see.

I would stay that the ‘elite’ have ‘slowly boiled the frog’, however, the process was not that slow.  And, like the frog being thrown into a pot of boiling water, we, the people are awake and see what is happening as clear as day.

Call me crazy, but emergency fences being erected around buildings that house elections that are supposed to be ‘open’ and ‘transparent’ is beyond absurd … they aren’t even pretending that we live in a real democratic republic any longer …

Fences at the Maricopa County Elections Department have been covered with a green tarp, reportedly preventing people from watching the counting process.

You can see them setting up the blockade here live on the “Drop Box – View One” camera.

What the hell are they hiding?

This looks like the Fraudulent 2020 Presidential Election in Michigan, where election workers covered the windows at Detroit’s absentee ballot counting center.

The Gateway Pundit reported that Maricopa County is still counting the ballots two days after the shady primary election. We also reported on the massive fraud concerns and voting irregularities that occurred.

The counting stopped shortly after Kari Lake took the lead statewide, and the State and Fake News Media are refusing to call the race.

Kari Lake shared a photo of the sketchy new fence covering, saying, “I told you we have eyes everywhere.”

The fences at MCTEC are being covered up so people cannot watch and see what’s going on. (I told you we have eyes everywhere)

We demand transparency.
This is not a good look. pic.twitter.com/5KbceJyx7U

It was previously reported on Twitter that Maricopa County was putting up extra fencing to keep people away.

America has fallen … can she still get up!?