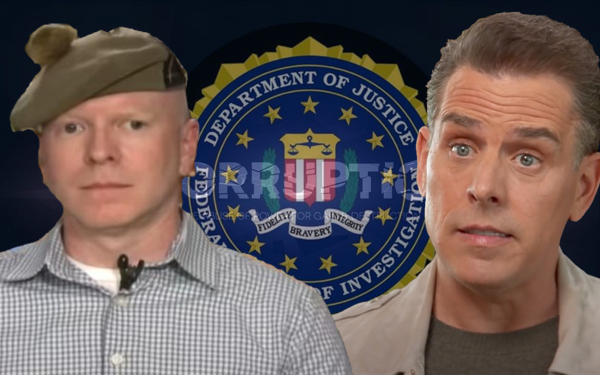 Rich Welsh| In a new book by the computer repair shop owner who turned over the Hunter Biden laptop from hell, John Paul Mac Isaac says that an FBI agent threatened him to stay silent.

That’s very easy to believe because ever since the Obama administration, the FBI has become a rogue agency that gets away with lawbreaking and is open to being used as a weapon for Democrats to go after their political opponents.

Mac said in December 2019, two agents came into his Mac Shop in Wilmington, Delaware to get the laptop following a subpoena, that he details in his new book “American Injustice: My Battle to Expose the Truth.”

The shop owner who had offered to hand over the laptop to the FBI two months earlier said that the threat came when he made a joke, saying, “Hey, lads, I’ll remember to change your names when I write the book.”

“Agent Wilson kept walking but Agent DeMeo paused and turned to face me,” Mac wrote of the threat.

Isaac wrote that the agent responded, saying, “It is our experience that nothing ever happens to people that don’t talk about these things.”

Mac said once the agents left the shop, he locked the door and took some time to “digest the encounter.”

“Was I being paranoid, or had what the agent just told me been a direct threat, or at best a thinly veiled one?” he writes.

Hunter Biden brought the laptop to Mac’s shop for repairs in April 2019 and then abandoned it. The shop owner said he did his due diligence to get Hunter to come back and get the laptop, but he got no response after multiple attempts. According to the contract Hunter signed and Delaware state law, after a certain amount of time where the owner does not come back to reclaim their items, they become the property of the repair shop.

It was 8 months later, after Mac gave the FBI the laptop, that he reached out to Rudy Giuliani, who at the time was President Donald Trump’s personal attorney. Giuliani gave a copy of the hard drive to the New York Post.

The laptop became another victim of the Democrat machine. The Post tweeted the story they wrote about the plethora of emails found on the laptop about Hunter’s overseas business deals that implicate his father, and immediately their account was banned on Twitter. About 50 left-wing former intelligence officials came out and said it was Russian disinformation. They didn’t provide any evidence of that because there was none. They just made it up to help the Democrat candidate Joe Biden. And the misinformation news media that acts as a Praetorian Guard for the Democratic Party went right along and reported the laptop story was Russian disinformation. Despicable, all of them.

Mac was forced to close down his business because he was being harassed by too many leftist haters after his private information was doxxed online.