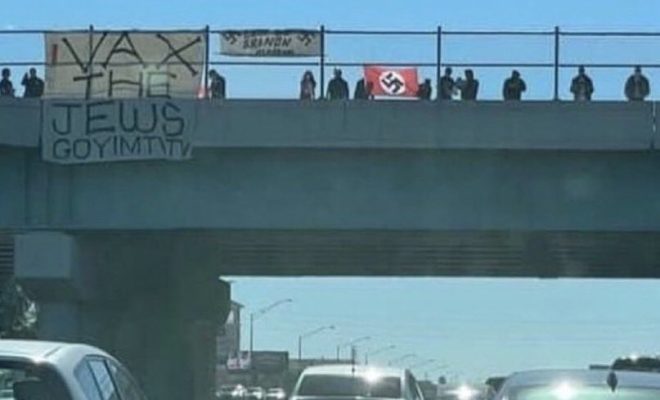 On Saturday, a Holocaust center in Florida and others condemned the presence of anti-American protesters holding Nazi flags and posters with antisemitic imagery outside a convention of young conservative activists that drew speakers President Donald Trump, Florida Gov, Ron DeSantis and several Republican U.S. senators.

The protestors were a part of a group who have- in the past attempted to appear as opponents of Democrat Joe Bidens, while they used hateful imagery.

Violent leftist protestors were on scene on Saturday to cause chaos as seen in the following video:

#BREAKING | Around 50 leftists protestors with Nazi flags are on the streets trying to shut down the SAS event from @TPUSA in Florida pic.twitter.com/yepARQx0P1

And protests were traced back to a group in Florida of Socialists, who have been on a violent rampage:

Florida Holocaust Museum chairman Mike Igel said that the demonstration represented “a direct threat” to the Jewish community in the area. The museum is based in St. Petersburg, across the bay from the Tampa Convention Center, where the protesters showed up Saturday outside where the Turning Point USA Student Action Summit convention was being held.

“Carrying the Nazi flag, or that of the SS, the unit responsible for some of the worst atrocities of the Holocaust, is an indefensible act of pure hatred,” Igel said in a statement. “This isn’t about politics or religion. It’s about humanity.”

As typical of the left- they appear to have dressed up as Nazis to tell the media they are Republicans.

Turning Point had previously put out a statement to local news outlets saying that the protesters had no affiliation with the conference. Besides Trump and DeSantis, other scheduled speakers at the Turning Point convention included Republican U.S. Sens. Ted Cruz and Josh Hawley and Fox News TV personality Laura Ingraham, click on Orlando reported.

One reporter did a little investigation and found that the group had origins with the National Socialist Movement- which Republicans do not support.

Some of the protesters were seen wearing shirts bearing the logo of a Kissimmee-based group, the National Socialist Movement. This same group took part in a Nazi rally in Orange County where a Jewish University of Central Florida Student was attacked in February, according to investigators.

The Orange County Sheriff’s Office announced, at the time, the arrests of three men who are accused of attacking a Jewish victim during a Nazi rally near Alafaya Trail and Waterford Lakes Parkway.

Deputies arrested Joshua Terrell, 46; Jason Brown, 47; and Burt Colucci, 45. Colucci is also the leader of the National Socialist Movement, the Kissimmee-based group behind the rally.

Again, Republicans are not socialists.

According to the affidavit for an arrest warrant, deputies responded to the rally on Jan. 29. Around 1:30 p.m., deputies said they were made aware that a young man had been pepper-sprayed by the rallying white nationalists. At the time, investigators said they could not determine who started the incident, but that they have since seen video of what took place.

As he drove by, the victim said one of the NSM members spat into the sunroof of his car. At that point, according to investigators, the victim got out of his vehicle and got into an argument with the group — displaying a Star of David charm on his necklace and announcing that he was Jewish, click on Orlando reported.