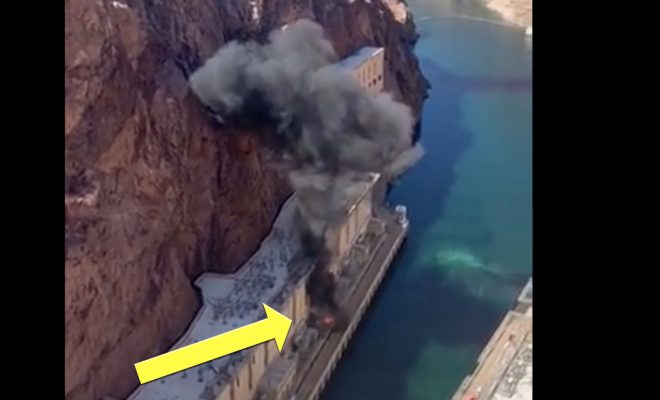 Rich Welsh| Kristy Hairston, a tourist at the Hoover Dam, took to social media on Tuesday to share a video where she captured a small explosion and some black smoke.

A woman or a child can be heard in the video saying, “My goodness, something’s just blown up,” as they were touring the dam.

A man can also be heard, who was maybe a tour guide, noting the explosion below them.

touring the #hooverdam and heard an explosion #fire pic.twitter.com/1tjWuNWBaZ

Fire department officials for Boulder City, NV responded to an emergency call from the dam.

Boulder City Fire Department is en route to an emergency call at Hoover Dam. No further information is available at this time.

Twenty minutes later, Boulder City officials put out another tweet saying that was the fire was successfully put out before firefighters arrived on the scene..

#Hooverdam – the fire was extinguished before Boulder City Fire Department arrived on scene. Bureau of Reclamation/ Hoover Dam will be handling any additional questions.

By almost 2:30 pm local time, the Bureau of Reclamation reported that it was a transformer that caught fire.

“At approx. 10 a.m. PDT, the A5 transformer at Hoover Dam caught fire & was extinguished by @usbr/Hoover fire brigade at approx. 10:30am PDT. There are no injuries to visitors/employees. There is no risk to the power grid. Power is still being generated from the powerhouse.”

https://twitter.com/usbr/status/1549460732726714371?The Hoover Damn is sitting in the Black Canyon on the Colorado River. According to the National Park Service, it is as tall as a 60-story building. Construction began in 1931 and was finally completed in 1935. The purpose of the endeavor was to allow floodwaters from the Nations’s largest man-made lake to flow in a controlled manner. It serves water to the states of Arizona, California, Utah, Colorado and Nevada, and some parts of Mexico. It also saved states like California and Arizona from the disastrous flooding the Colorado River was famous for at the time.0