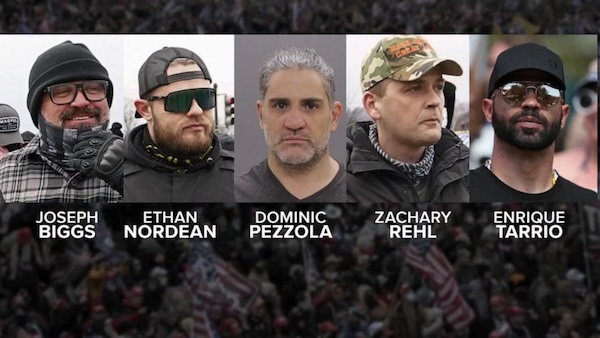 Erica Carlin| The government and the unconstitutional J6 committee maintain that the Proud Boys were conspirators in the storming of the Capitol on January 6th, which they allegedly planned during a Zoom call.

But, a funny thing happened when a video of that meeting was released by a J6 defendant. The video shows that the alleged planning meeting never mentioned anything other than they wanted to be ready to defend themselves should Antifa attack and a discussion on how to avoid getting into trouble.

Beyond those two subjects, the rest of the call was just a BS session, and no conspiracy or plans to enter the Capitol were ever discussed. The meeting on Zoom was a huge nothing burger.

But, Liz Cheney could always call serial liar Cassidy Hutchinson back to the stand and relate how President Trump met with the Proud Boys and the Oath Keepers to plan ways to overthrow the government. I’m sure there is no lie that she is above telling. Just hand her a script and stand back.

Fischer was in the Zoom meeting as a viewer in real time as Proud Boy Chairman Enrique Tarrio gave generalized directives to say out of trouble and never to breach police lines. “Be defensive, never offensive,” said Tarrio. Stay away from “normies” (non-Proud Boys) to avoid aggravation. A buddy system when going to “take a leak” was also adamantly stressed so nobody got lost from the group. “Avoid getting stabbed (by Antifa), that sh*t hurts,” a member chimed in. (Multiple Proud Boys were stabbed by Antifa members at the Million Maga March Rally on December 12th, 2020.)

When asked why he released the video, Fischer said:

“Proud Boys like Ethan Nordean, Joe Biggs, and others have been in jail in solitary confinement for a year and a half. When I got out of jail I found out they had been indicted with seditious conspiracy. I knew this video existed and that those charges were bogus. I felt I needed to do something because they are innocent and this video could prove that. They are Patriots, not Seditionists, and they deserve to be freed.”