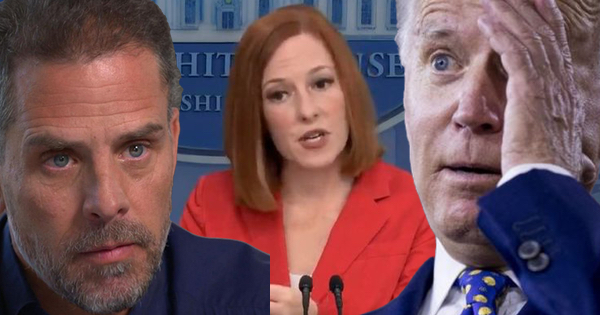 Erica Carlin| So the general ‘story’ is that Biden never spoke to his son about his business deals in other countries and he was certainly not involved—BUT they add, if he was it was while he was out of office. Well, a reporter drilled the White House Press Secretary and she made a boo boo.

The reporter questioned if Biden still stood by his claim that he did not speak to his son about business but now that news has come out about other shady Biden deals for years ago, the reporter pressed Psaki for answers.

PBS’s Lisa DeJardins asked White House Press Secretary Jen Psaki for comment on the latest Hunter Biden finding by the New York Post, Fox’s Jacqui Heinrich came into Tuesday’s briefing with a question that’ll be worth revisiting as the Biden probe in Delaware moves along as she wanted to know whether President Joe Biden still stands by his claims that he never discussed Hunter’s business dealings with him or with other people.

Oh, and the kicker? Psaki claimed not to have information from ’10 years ago’. You know, when Biden was Obama’s Vice President. I mean, she works at the White House, right? They’re monitoring employees there, right? Or do they only spy on ‘some’ people—Like Trump?

Here is where Psaki screws up:

“He maintains his same statements that he’s made in the past. I would say — I know you’re referring to WAVES records that were released more than 10 years ago.  I really don’t have more detail or information on them. I’d note that there was a gap when WAVES records were not released, but I don’t have more information about visits from more than 10 years ago.”

In her attempts to land a snarky little comeback, Psaki admitted that the details for those deals are at least 10 years old. Which, I mean, do you know where Biden was 10 years ago? Because I sure do. He was busy doing nothing as Obama’s VP.

Also, is anyone buying that the White House didn’t keep detailed records during the Obama-Biden era? I mean, don’t they spy on every presidency or did they save all that for Trump? Take a look and let me know what you think.

NANDITA BOSE: A quick question on Dr. Jha talking about cases going up and the VP testing positive. Can you talk a little bit about whether the administration and society as a whole perhaps have moved away a bit too quickly from mitigation efforts such as masking? And is the administration perhaps thinking about strengthening any of those measures, especially the ones that were loosened?

JEN PSAKI: Well, those decisions and those recommendations are made by the CDC and our public health officials. So I don’t have anything to preview for you. Those are decisions that they make, and we obviously abide by that from here. I’d remind you that their recommendations include — are based on what zone of the country you live in — right? — whether it is a green zone, a yellow zone, or a zone that has a higher rate.  And they continue to recommend masking on transportation on fed- — you know, that we — and we abide by that from here as well. So, I don’t have any changes on that to preview. But as Dr. Jha noted, our focus — and as we noted when we rolled out our 100-page plan — continues to be on tracking and reducing hospitalizations and deaths. And we’re certainly aware that a very — with a very transmissible variant, that there — we expect that there could be case increases, as we’ve seen over the last few weeks with BA.2.

WEIJIA JIANG: Does it concern you that [Joe Manchin’s] saying that Title 42 should not be done away with until there is an immigration policy?

PSAKI: Well, that’s just not how it works. Obviously, Title 42 is — the authority was given to the CDC by Congress. They made a decision. If Congress wants to decide — make any decisions about the next steps for Title 42, they can work together on that. But that is an authority or a decision that have to — would have to lay in the body that he works in.

JACQUI HEINRICH: On Title 42, we’ve heard you guys say that this is a public health order, it’s not an immigration order, it’s the CDC’s decision. But yesterday, members of the Congressional Hispanic Caucus, who met with the President, relayed some of what he expressed in that meeting. And one of them said that the President told the group that he was looking forward to lifting Title 42, describing it as an excuse to keep people out of the country and anti-immigrant. Is the President really wanting Title 42 to go away because it was a Trump-era policy?

PSAKI: Well, the President has never felt that Title 42 was a — an effective immigration policy, and he talked about that during the campaign. But the authority has always rested in the CDC to make that determination. And he left the CDC to make that determination, unlike his predecessor, about a range of decisions. So, the President has never — never made a secret of the fact that he thinks immigration reform is necessary and that Title 42 was never a replacement for comprehensive immigration reform that would put in place smarter security, that would ensure there was an asylum processing system that worked. And that is something he would be eager to work with anyone on to get done.

HEINRICH: So if this — conditions warranted it, would the White House want to see the CDC reimpose Title 42 in the instance that the cases are up and the metrics that they use to measure that warrant that decision?

PSAKI: Well, the CDC, again, has the authority to make a determination about what the health conditions warrant, so we will leave it to them to make any decisions or recommendations.

HEINRICH: And then, with the Vice President being out — obviously, she’s broken a lot of ties for votes — and then we have senators; I believe Warre- — Wyden and Murphy also out — is there any concern about ability to get confirmations through this week with her absence?

PSAKI: Well, I would say there are also some Democrats who have announced that they have also tested positive for COVID. You may be referring to the Federal Reserve nominees or others. That is something that members and leaders will work through in Congress. We are confident we have the votes to get them confirmed. We’re eager to have them in place. But, of course, we need all of people — all members there to do that.

HEINRICH: And then I had one follow-up on Dr. Jha — something that he said earlier.

HEINRICH: We’ve talked about the administration surging resources to the border —

HEINRICH: — including resources to vaccinate migrants. And the last time I asked about this, I believe your answer was something along the lines of, “We have enough funding and supply to take care of the 23 sites that DHS is going to be running to get migrants vaccinated and also take care of uninsured Americans.” But it sounded, in his answer, like that might not be the case anymore. So are we in a place now where there might be a choice where people would have to choose or the administration would have to choose between supplying resources to migrants coming across the border versus taking care of uninsured Americans?

PSAKI: I’m happy to check on those resources, Jacqui. I would say that our broad concern about COVID funding is based on a couple of issues that he talked about. One of them is making sure that we are ahead of the world on being able to order ahead, primarily, a lot of different treatments that will help ensure that we have the best vaccines, the best boosters, enough supply once individuals under 50 are eligible. And certainly, we want to keep all of our programs running across the country.  But —