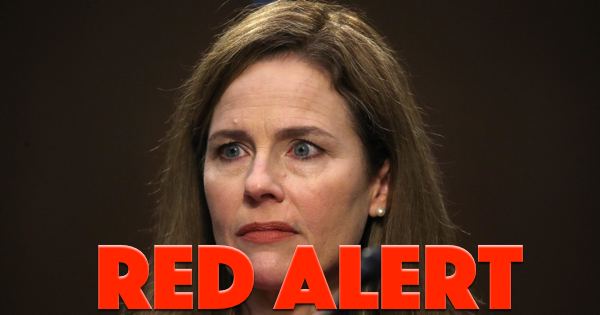 The leftist radical baby-killing group ShutDownDC has been set off by not getting abortions to satisfy their bloodlust have decided to put out a bounty on conservative members of the Supreme Court and John Roberts, too. They will pay $50 dollars for the sighting of a justice and $200 dollars if they are still there 30 minutes after you call. Makes you wonder who is financing this group.

The idea is that they want to harass the justices and if that isn’t a crime, then Congress needs to pass a law to make it a major felony with a five-year minimum sentencing. That will never happen because the Democrats want them to be harassed or even killed so that Joe Biden can name another judge to the court. There is nothing a Democrat won’t do in order to gain power. Nothing. Nancy Pelosi might not be willing to kill a justice, but she will hold the coat for the one who does.

“DC Service Industry Workers… If you see Kavanaugh, Alito, Thomas, Gorsuch, Coney Barrett, or Roberts DM us with the details! We’ll Venmo you $50 for a confirmed sighting and $200 if they’re still there 30 mins after your message.”

DC Service Industry Workers… If you see Kavanaugh, Alito, Thomas, Gorsuch, Coney Barrett or Roberts DM us with the details!

We'll venmo you $50 for a confirmed sighting and $200 if they're still there 30 mins after your message. https://t.co/xXWZ5JZiE7

On Friday, Politico reported that protestors appeared in front of Morton’s restaurant in Washington D.C. on Wednesday. They called the manager of the restaurant and told him to give Kavanaugh the boot. But, rather than send him out the front door, they snuck him out the back door to safety.

Politico linked to a Wednesday tweet from ShutDownDC that said, “We hear Kavanaugh snuck out the back with his security detail. @mortons should be ashamed for welcoming a man who so clearly hates women.”

The outlet reported that according to an individual familiar with the matter, Kavanaugh did not see or hear the demonstrators, but had a full meal and departed before dessert.

“Honorable Supreme Court Justice Kavanaugh and all of our other patrons at the restaurant were unduly harassed by unruly protestors while eating dinner at our Morton’s restaurant. Politics, regardless of your side or views, should not trample the freedom at play of the right to congregate and eat dinner. There is a time and place for everything. Disturbing the dinner of all of our customers was an act of selfishness and void of decency,” a representative for the restaurant chain said, according to Politico.

“No rights for us, no peace for you. Get f[***]ed @mortons,” ShutDownDC tweeted.