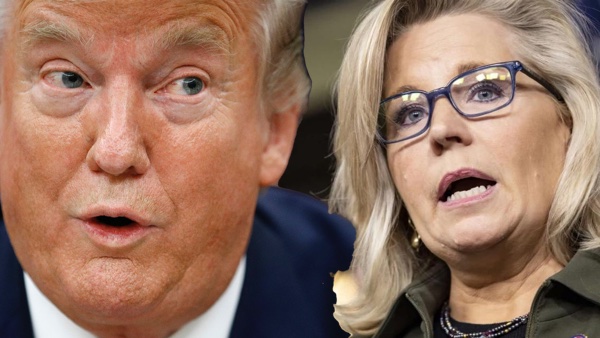 “Same thing’s going to happen in Wyoming to Virginia resident Liz Cheney, that happened in South Carolina to Congressman Impeach Master Tom Rice, who lost as an incumbent by 28 points!” Trump posted on his social media platform, Truth Social. That’s what happens when you vote to impeach a very popular president of your own party when it’s patently obvious the president did nothing wrong and the impeachment was a rigged setup by the other party. Your constituents no longer trust you.

Just like Rice, Cheney is among ten House Republican RINOs who joined the radical Democrats to impeach Trump for supposedly inciting the January 6 riot that the Democrats falsely call an insurrection. It would be the first time a riot was incited by asking people to “march peacefully and patriotically.” The overwhelming majority of House Republicans voted against impeachment because they have triple-digit IQs and knew the Democrats were pulling a scam in the hopes of hurting his efforts from ever running again.

Trump targeted Cheney by looking for a primary challenger who would defeat her, finding and endorsing Harriet Hageman, a Cheyenne attorney, one of four Republicans challenging Cheney in the primary. I guess Cheney is hoping that all those challengers will dilute the opposition vote and she’ll win by a plurality.

Polls are showing Cheney and Hageman are the top two vying for Cheney’s seat. One poll has Hageman ahead by 28 points.

For example, a poll conducted by Fabrizio, Lee & Associates of 400 participants from “likely” Republican voters asked them, “If the Republican Primary for Congress were held today for which of the following candidates would you vote?” The poll was done from June 1 to June 2.

According to the Federal Election Commission (FEC), Cheney fundraised $10 million for her campaign while Hageman only fundraised $2 million. Nothing worse than losing to an opponent you outspent by 5 times.

Most of the money Cheney fundraised came from out of state. Probably Democrats. Among Wyoming voters, Hageman brought in a little over $543,000 and Cheney raised less than half of that or $255,336.

Wyoming only has one House seat and Cheney has held it since 2017. When she joined the radical Democrats and voted to impeach Trump, the Wyoming Republican Party voted to censure her and then in the US House of Representatives, she was removed as GOP House Conference Chair for continuously criticizing Trump.

Now, Cheney is trying to exact revenge on Trump by telling lie after lie on the J6 committee. She has ignored exculpatory evidence and hasn’t called a single person to testify on behalf of Trump. Cheney is taking part in a wholly unamerican campaign where due process has been thrown out the window. I think Cheney has been hoping that the false information being conveyed by the J6 committee would reunite her with Wyoming voters, but it’s not having the desired effect. If the Democrats allow Wyoming to have a free and fair election, Liz Cheney will lose the primary.