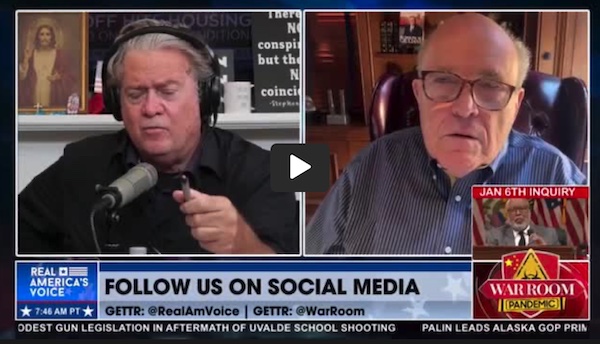 Rudy Giuliani told Steve Bannon on The War Room he submitted evidence 5 days after January 6th that antifa was involved in the death of Ashli Babbitt.

Rudy Giuliani: The hearing they held the other day told us nothing new. How about the death of Ashli Babbitt? How about, tell me the number of Antifa members in that riot. Five days after that riot I submitted to the FBI unequivocal evidence that Antifa organized one of the main breakins. That Antifa was involved in the killing of Ashli Babbitt. That the cops abandoned the position so that the people could go into the Pelosi office. The cops abandoned two minutes before. When you look at Ashli Babbitt she was picked up, hit and then fell down. She had no gun, she presented no danger to anyone there. This is a dastardly crime. And this committee tells you how miserably dishonest they are.

John Sullivan, a noted leftist leader from Utah, and some of his friends stormed the Capitol on January 6th and he was right next to Ashli Babbitt when she was murdered. Why isn’t he in the Washington Gulag? Did they raid his home at four o’clock in the morning? Is he being charged with any crimes? Don’t be ridiculous.

John Sullivan is a Black Lives Matter goon from Utah who was flown into Washington to oppose the Stop the Steal rally. Who is paying for these rioters to go from city to city, spreading hate and destruction? Inquiring minds want to know. It has got to add up to a tidy little sum, don’t you think? And, who is deciding where they are going to and why?

In August John Sullivan threatened to “rip President Trump from the White House.”

The Black Lives Matter leader from Utah made it to Washington DC for a rally and march on Friday.
(Rand Paul said they were funded and sent here from out of state!)

During his time with the microphone the Utah leader of Black Lives Matter John Sullivan called on BLM to “rip Trump from the White House!”

Mr. Sullivan then called for a “Revolution!”

That’s what they want.
That’s where this ends.

BLM inc. threatening to “rip the president out of the White House”

They say they won’t wait until the next election.

They’re openly calling for a revolution.

This is domestic terrorism on full display, out in the open. They don’t even try to hide it. pic.twitter.com/OyhNSzBEwu

Meet BLM criminal John Sullivan was arrested for threats and violence against conservatives in Utah!

John was interviewed on CNN about the film he took inside the CAPITOL of Ashli Babbit lying in a pool of blood dying – WHY was he there?

Just ran into John Sullivan the suspected BLM activist that was amongst the protesters that stormed the Capitol and was arrested yesterday. He appears to have been released!

In a phone call he can be heard saying that “no he’s not being charged”. pic.twitter.com/ZM11JpYk3J