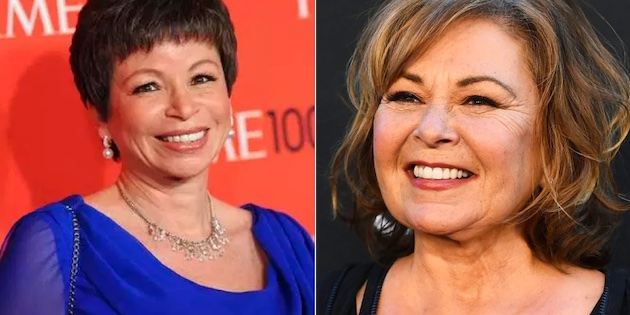 Roseanne Barr is speaking out about her firing by ABC. ABC stands for “Always Ban Conservatives.” That was certainly a large part of the reason Barr was fired. Barr, who was the star of the popular show, “Roseanne” is an outspoken conservative that did not fly with the brass at ABC. Roseanne Barr says that ABC was looking for a reason to fire her from the show that she owned. She gave up those rights so that the actors in the show could keep their jobs.

“Any tweet that was not ‘I love Hillary Clinton,’ I got a call for.”

Roseanne was allegedly fired for a tweet about Valerie Jarrett, Barr said she realized she shouldn’t have sent that tweet, and ABC fired her on the spot for what they called a racist tweet. In her def3nse, she claimed that she thought Jarrett was white and she certainly could pass as white.

She does look white, doesn’t she? ABC never answered Barr when she claimed she thought Jarrett was white and never gave her a chance to apologize. They had found a reason to fire her and they would let nothing stand in their way.

Barr said that she immediately realized she should not have tweeted about Jarrett.

At the time, she wrote, “[M]uslim brotherhood & planet of the apes had a baby=vj,” pointing to Jarrett, who is black.

She added that she was not even afforded the opportunity to formally apologize, let alone receive a second chance.

“When they called me up, they were like, ‘What possible excuse have you got for why you did this? Why you did such an egregious, unforgivable thing?’ And I said, ‘I have no excuse. The only thing is, I thought she was white.’ And they said nothing back.”

“Witch-burning is what it is,” Barr said about being cast out of Hollywood following the tweet and her subsequent firing. “Intellectual witch-burning. And arrogance and ignorance. All of the press of the United States, and the world and how they interpreted my tweet without any knowledge of the fact that I was sending it to a journalist in Iran about what was happening to the people in Iran. We were under such terrible censorship and it’s just terrible and frightening.”