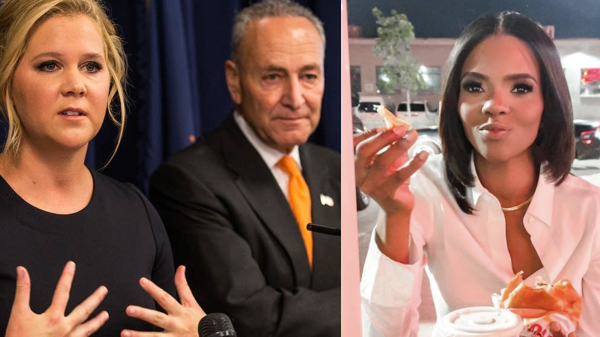 Rich Welsh|  Candace Owens evidently has had enough with white liberal celebrities trying to stir up black rage and use it to get what they want.

Candace is tired of white liberals trying to encourage black people to protest the Court’s decision.

Schumer posted on Instagram saying, “We shouldn’t determine our rights by interpreting the intentions of a bunch of slave-owning rapists who’ve been dead for hundreds of years.” Wow, what a piece of [rhymes with hit].

There was a lot of hate for her country in there. I don’t know if she’s capable of understanding it or not, but the Constitution was violated in 1973 by the Roe decision. The justices on that court lied. Roe herself lied. The current court simply remedied the extremely bad law by making it Constitutional again.

“If there’s a picket sign anywhere, Amy Schumer picks it up – she just is like ‘I have to be outside screaming about something,’” Owens said in a video she captioned, “Roe V. Wade gets overturned and hyper-privileged liberals want black people to protest on their behalf? Again? No. Not this time.”

“This is a Hollywood trope almost,” she said. “White wealthy women in Hollywood love to basically say ‘I either get what I want, or I’m going to correlate to slavery.’ This is their thing.”

She’s not wrong. Everything the Democrats do is race-based because they know it usually works. It’s just pretty slimy to get people angry and enraged by using race. Does Schumer know that for years now, more black babies in New York were aborted than born?

The Blexit co-founder said that leftists like Schumer like to use black people and racism for issues that have nothing to do with race.”

“She’s using this because she’s being whiny and she’s being bratty, and she thinks it’s acceptable to harness black pain to get what she wants,” Owens said.

Owens then pointed out the inconsistency of leftist’s arguments when using racism and slavery to push for pro abortion issues. She mentioned Margaret Sanger, the founder of Planned Parenthood who hate black Americans, and was a eugenicist and did not want black people to procreate, so she targeted abortion at black communities. She even convinced black pastors that it was in the best interest of black people to abort their children.

“The black population today would be double if it weren’t for Planned Parenthood,” Owens said.

We know that at least 20 million black babies have been aborted since 1973. According to national statistics, about 38 percent of all reported abortions in America in 2019 were performed on black women, even though the black population is only 13.4 percent. Don’t tell me they’re not being targeted.

← Previous Story Cassidy’s Testimony Against Trump BLOWS UP IN HER FACE & Liz CHENEY Is Going DOWN With Her!
Next Story → Democrats Turn Their Backs On Kamala!