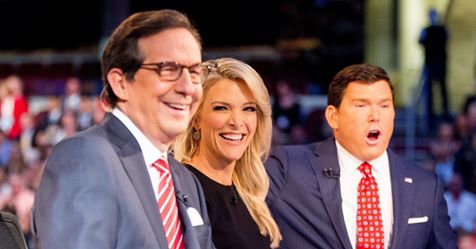 Fox News was losing favor with Conservatives and Populists known as the MAGA crowd for quite some time, but ever since November with the bizarre way the network called the 2020 Presidential elections, appearing to be working with the far left to misinform the public about vote tallies, the network has been bleeding support and viewers.

Along comes a story that will expose many of the details about what was going on behind the scenes at the media network, as The Hollywood Reporter wrote,” Ed Henry Sues Fox News For Defamation’.”

“Henry was fired last summer over what the company says was “willful sexual misconduct” claims and lobs a number of explosive allegations in his suit,” Alex Weprin wrote.

“Fired Fox News host Ed Henry has filed a lawsuit against the network and its CEO Suzanne Scott. Henry alleges Scott covered up an affair between Fox News president Jay Wallace and a subordinate. Fox says the allegations against Wallace are false,” CNN reported.

HOW IS HOLLYWOOD DIFFERENT THAN THE ‘NEWS MEDIA” DRAMA?

Ivory Hecker, who made national headlines in June over allegations that she was not allowed to discuss matters of concern to Fox News viewers, chimed in about the case and presented her perspective of Henry’s lawsuit.  Hecker pointed out what she saw as allegations of censorship.

“Let’s talk about the part of the lawsuit where FOX banned @edhenryfrom asking certain questions that the viewers were interested in, because the corporation had money motives….”

Let’s talk about the part of the lawsuit where FOX banned @edhenry from asking certain questions that the viewers were interested in, because the corporation had money motives…. pic.twitter.com/K0JXakqVOV

LOTS OF SEX AND LESS NEWS

In his 23-page lawsuit, Mr. Henry claimed that Fox News and Fox News Media Chief Executive Suzanne Scott lent credence to false allegations of sexual misconduct against him by issuing a statement about the circumstances of his dismissal. Mr. Henry said in his lawsuit that the statement was designed to “burnish [Ms. Scott’s] image as a tough, no nonsense female executive who cleaned up Fox News.”

Ms. Scott was named to the top role at the cable network in 2018, after a period of turmoil during which Fox News faced a number of high-profile sexual misconduct allegations against on-air talent and senior executives.

Fox News fired Mr. Henry in July last year after investigating a complaint made by a former employee of the network. The company said at the time that it had hired an outside law firm to investigate the allegations and terminated him based on the probe’s findings.

Fox News Media is like a dying 1980’s Soap Opera anymore. According to some recent ratings, the network has suffered some major setbacks, and their views seem to have landed at Newsmax.

“Donald Trump’s super-charged return to the political stage over the weekend was a rating smash for Newsmax, which trounced Fox News in key ratings,” Newsmax reported about viewers for an Ohio Rally last week.

According to Nielsen, 1.9 million cable viewers tuned into Newsmax to watch the network’s coverage of the former president’s rally Saturday in Wellington, Ohio.

Bottom line: Fox News Media is no different than a bad Soap Opera.

Remember when there was another drama about lawsuits and firings with Gretchen Carlson, who got 20 million dollars after signing a non-disclosure agreement to not talk about the drama. The fact that she took money to not talk about Fox and then went on to keep talking about Fox shows that the inside of that machine is somewhat like a cult of nonsense.