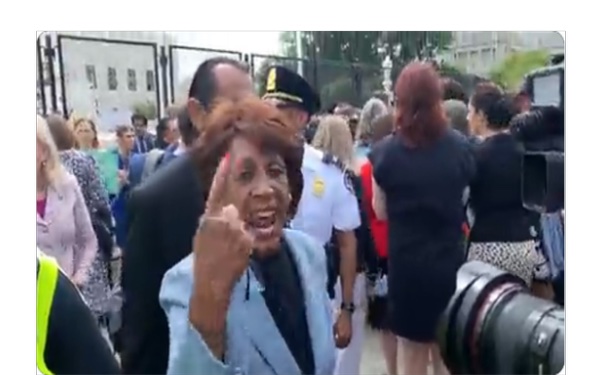 Waters, working the crowd with another moron who doesn’t deserve to serve in Congress, Representative Al Green (D-TX), joined protesters outside the Supreme Court building following the ruling. These two don’t have the slightest clue why the Court sent abortion back to the states.

Waters told reporters, “You see this turnout here? You ain’t seen nothing yet,” Waters said, of the fast and furious running around with signs. “Women are going to control their bodies no matter how they try and [sic] stop us. The hell with the Supreme Court, we will defy them.”

Unhinged AOC and Maxine Waters call for INSURRECTION after Supreme Court TEARS Roe v. Wade in half in historic decision

I’m surprised Waters didn’t tell the screaming banshees to attack the justices in a restaurant, in a department store, at a gasoline station and tell them they are not welcome there. Go figure.

It wasn’t all doom and gloom from a group of dopes who haven’t realized that the Constitution won today.

Supreme Court, moments after it struck down Roe v. Wade and ended constitutional protections for abortion. In seconds, abortion rights opponents erupted in cheer: Jumping. Singing. Loud yells of "we are the pro-life generation, and we have abolished abortion." pic.twitter.com/9S1H8Qyrbd

The Supreme Court finally ruled that the Constitution does NOT include a right to abortion. It’s just not in there. You can read the Constitution, hold it up to the light, upside down, and pour lemon juice on it, and you’re still not going to find it in there.

There are threats from a group calling itself “Jane’s Revenge” planning a “Night of Rage” where activists are planning to attack the Supreme Court and the justices. But CNN, Nancy Pelosi, and Liz Cheney will tell you that it’s not an insurrection.

“There’s a group that has been distributing flyers around Washington, DC, but also across the country and also online called Jane’s Revenge that declares there will be a night of rage, looting, burning, rioting if Roe is overturned,” reporter Kimberly Halkett said at a white House press briefing to White House mouthpiece Karine Jean-Pierre.

By overturning Roe, the Court sent the issue of abortion laws back to the state legislatures, where it has belonged all along.

“We hold that Roe and Casey must be overruled,” Alito said. “The Constitution makes no reference to abortion, and no such right is implicitly protected by any constitutional provision, including the one on which the defenders of Roe and Casey now chiefly rely — the Due Process Clause of the Fourteenth Amendment.”

“Roe was egregiously wrong from the start. Its reasoning was exceptionally weak, and the decision has had damaging consequences. And far from bringing about a national settlement of the abortion issue, Roe and Casey have enflamed debate and deepened division,” Alito wrote.