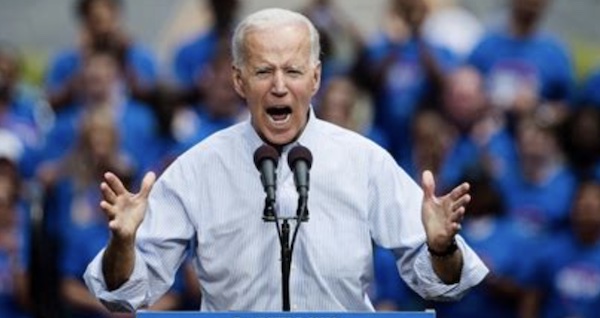 Rich Welsh| President Joe Biden said during a bully pulpit address on Thursday that the Second Amendment is “not absolute,” then went into a gun control push that included eight or more gun law proposals.

First off, the Second Amendment is absolute when considering the firearms that Biden wants to unconstitutionally infringe upon. That’s what “…shall not be infringed” means.

It’s very disingenuous to say the Second Amendment is not absolute when that term really means something to the nature of you can’t own a nuclear missile. Biden has been talking about 9mm firearms which are the most popular in the US.

Biden has proposed a ban on so-called “assault weapons,” which we recently gleaned they mean semiautomatics, which is nearly every firearm in the nation. He proposed another ban on “high capacity” magazines, even though it takes about two seconds to switch out for a new mag, so that won’t do anything.

He wants to raise the age to purchase an AR-15 and similar firearms from 18 to 21.

He threw in the old “strengthen background checks,” but that wouldn’t have stopped most of the mass shooters over the last decade or more because they all purchased their weapons legally and passed background checks done by a registered FFL.

He wants to create a “safe storage” law that will cost lives. Imagine you hear window glass break in the middle of the night and in your silent household you hear someone running up the stairs to get to you before you can call 9-1-1. You reach into your side table drawer for your weapon to protect you and your loved ones and you have to take an additional 10 to 30 seconds to get the damn safe open because you can’t see in the dark so you have to turn the light on and then let your eyes adjust. By that time, your next outing will be in a pine box.

“I also believe we should have safe storage laws and personal liability for not locking up your gun.” Inside your home, you have the right to do what you want with your firearms. The overwhelming number of legal gun owners are very careful with how they store their weapons. Otherwise, the cases of accidental shootings inside the home would be much higher than it is.

Biden added, “If you own a weapon, you have a responsibility to secure it….if you don’t [lock it up] and something bad happens you should be held responsible.” That’s just another infringement on an individual’s right to keep and bear arms. It is making a criminal out of innocent gun owners.

Biden wants federal red flag laws. Ref flag laws are a way for the government to take away a person’s firearms even though they have not been convicted of a crime. The idea is that if someone makes a call to authorities and says their neighbor is acting erratically and he owns guns, the government can force their way into the person’s home and take their guns from them without charging them with any crime. This will be abused more-so than hate crime and #MeToo hoaxes.

And last but not least, Biden talked about the mental health crisis that seems to be the main reason for just about every mass shooting.

At one point, Biden said, “We should limit how many rounds a weapon can hold? Why in God’s name should an ordinary citizen be able to purchase an ‘assault weapon’ that holds 30 round magazines that let mass shooters fire hundreds of bullets in a matter of minutes?” Again, a shooter can easily carry two additional 10-round magazines and it takes two seconds or less to swap out for a new one, so he would potentially have 30 rounds, anyway.

All of these things are like having law enforcement knock on your door and say, “Hello, ma’am. I know you have a perfect driving record, but we’re here to confiscate your car because a drunk driver that you don’t even know killed 10 people on the interstate.” That’s Democrat logic.

None of what Biden mentioned should survive a Supreme Court challenge, that is, if the Court still believes in the Second Amendment and the US Constitution. With Chief Justice John Roberts, that’s always a crap shoot.