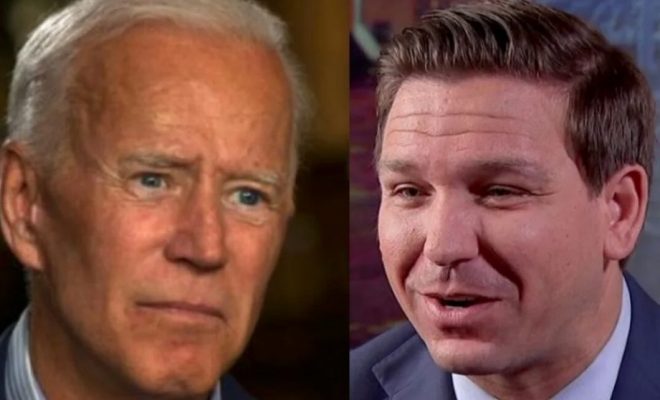 Rich Welsh| Don’t you just hate how shy Gov. DeSantis is? Just kidding. Like Trump, DeSantis speaks whatever he is thinking and if you don’t like it, tough. His latest comment which is sure to set off the leftists is when he said that the Mexican drug cartels should make him an honorary member for his open border policy that has allowed them to expand the amount of drugs they bring into the country.

DeSantis made the comment as he signed a bill into law that would stiffen the penalty for fentanyl. The penalties for trafficking fentanyl in Florida will increase to for trafficking fentanyl from three years to seven years for 4-14 grams, and from 15 to 20 years for 14-28 grams. Fentanyl is much more deadly than heroin and it can be brought into the country from Mexico through our porous border. It only takes a small amount to cause death.

"Joe should be given an honorary membership in the Mexican drug cartels, because nobody has done more to help the cartels than Biden with his open-border policies.” 💣💣💣 pic.twitter.com/Bk79uzIsTw

“Floridians of all walks of life have witnessed the destruction caused by the opioid epidemic across our state. While the Biden administration has failed to stop the flow of dangerous drugs, including fentanyl, across our southern border, we are taking action in Florida to lower both the demand and the supply of illicit and illegal drugs.”

“If you look at what’s going on at the southern border right now. I don’t think we’ve ever seen anything like this, with the massive numbers of people that are coming across the border illegally. It’s fueling a massive infusion of fentanyl into this country.”

“Earlier today, I held an assembly at a school in Kissimmee to heighten students’ understanding of the dangerous and life-altering effects of substance use and abuse. Our initiative, The Facts. Your Future., not only tells our youth to say no to drugs, but also teaches them why. I am proud of Governor DeSantis for signing into law enhanced penalties for the sale and distribution of opioids today. We’re committed to tackling this problem from all angles and striving for a drug-free Florida.”

Yep, Joe is partially responsible for his own kids addictions.  Of cource, you can add Piglosi and all the other open border politicians to this list.  They have to be part of the human trafficink also.

That’s why I say we have no hope for change except by force. This country has been taken over by corrupt politicians for over 45 years. Everyone one that in government from the past 45 years has baggage. They all need to be put on trial and investigated.i do home work …..http://www.workbz.com

I get paid more than $200 to $400 per hour for working online. I heard about this job 3 months ago and after joining this I have earned easily $30k from this without having online working skills . Simply give it a shot on the accompanying site…
Here is I started.…………>> http://Www.BizPay1.com