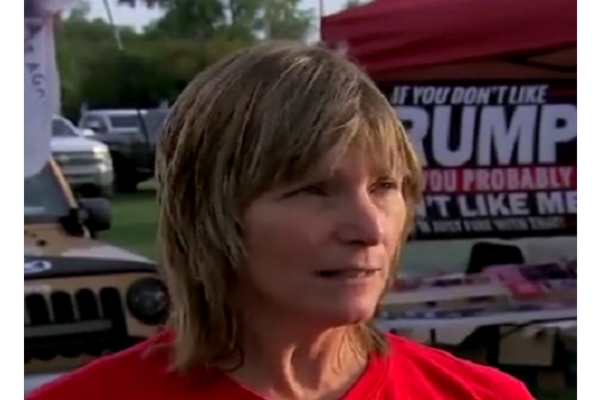 On Saturday, a rally at the State Fairgrounds in Des Moines, Iowa held by Donald Trump (Donaldus Magnus) had record setting attendance by any standard.

The media vultures slithered among rally-goers in an attempt to get some gotcha soundbites to help them trash the event. Whenever the Fake News media goes to a Trump rally, they speak to attendees acting like they’re trying to get positive feedback, but the reporters are creatures who do not live in the same world as the rest of us. They think people wanting America to be great again is a foreign concept, something to be ridiculed.

MSNBC, which stands for More Silly Nonsense By Communists, reported that people who attended the event gave a solemn message to the country that they see “a civil war is coming.”

“I can see it’s a bit of a circus there behind you. “What are you seeing and hearing?” a snarky Alex Witt commented as a lead-in for a reporter there at the rally. This clown TV “journalist” was once sued by a former best friend for failing to pay off a $65,000 loan and she calls the Trump rally a circus?

“You know the old proverb absence makes the heart grow fonder,” MSNBC’s Gary Grumbach, a field producer and reporter, reported. “That’s exactly the situation here on the ground in Iowa.”

“A poll out this week from the Des Moines Register shows that Donald Trump has more support and more favorability in this state right now than he did when he was president,” the reporter noted. “53% of respondents to this poll said they viewed him favorably. That’s a higher number than Governor Kim Reynolds and even long-time Senator Chuck Grassley.”

And why would anyone expect anything different? The country was doing better than ever before, thanks to Trump and his administration. They solved the illegal immigration problem. They brought manufacturing jobs back, jobs that Obama/Biden told us were gone forever.

During a PBS town hall that aired Wednesday, Obama referenced Trump’s promise to bring back jobs to the United States when talking about manufacturing.

Well, ta da! Trump did it. And he can do it again, which is why all the excitement at his rallies. Never forget that the majority of the media overwhelmingly support what is going on right now. They support the destruction of America because, like all leftists, they hate America.

The poll question asked whether people believe the country is on the right track under Biden. 70 percent of people polled said they believe we are on the wrong track. Quinnipiac and other polls are showing abysmal numbers for Joe Biden’s performance so far and he hasn’t been in office a year yet.

Lori Levi, an attendee of the Iowa rally, when asked about it said, “I think the Republicans are about as weak as they possibly could be in Congress.  You have maybe six that are worth their salt,” she said, adding, “Ted Cruz, Mike Lee, Rand Paul, and two or three others. The rest of them are just the same as the Democrats. They’ve been there too long. They’re establishment. They don’t care about the American people because they’re in their elite little tower.”

She is 100 percent correct, but the media want soundbites like that to make it appear that the reason Republican voters are angry with the party is because they are causing the serious problems our country faces under Biden’s disastrous policies when the truth is they are angry because they are not doing enough to fight against the Democrats who are destroying the country.

“A Civil War coming,” the reporter repeated for emphasis. “That’s what she said, and that’s the sentiment that we’re hearing from a number of people on the ground here today at Trump’s rally.”

When you have half the country that wants to criminalize the way you live, you watch hundreds of thousands of illegal migrants being allowed to come over our border and stay, not being tested for COVID yet your government wants to force you to take a vaccine that is still considered experimental; you see the government paying people more money to stay home and join the Flat Ass Society than get a job which is contributing to inflation along with a whole list of other things that are degrading life in America and you know the Biden regime is intolerant and will not listen to the other side; you tend to start thinking enough is enough.

I see more of a national divorce coming than a civil war. One side of the country wants government authoritarianism to criminalize the other side, and the other side just wants to be let alone so they can live their lives. There is no reasoning with people who want the government to attack you.

Trump spoke to the people at the Iowa rally, letting them know he understands their frustrations.

“We’re going to take America back,” he said to the enormous audience.

​”As disastrous as the Biden administration has been, no one can blame the great state of Iowa, because boy we did really — we did really good here,” he said. “Iowa, what a place.”

Trump could turn a lot of the problems we face around very quickly. Some problems Biden created may take a very long time to get back on track, like America’s standing in the world after the botched Afghanistan withdrawal, the millions of illegal aliens that will be roaming our country by 2024, energy shortages that experts say are coming soon and will affect every family in America.