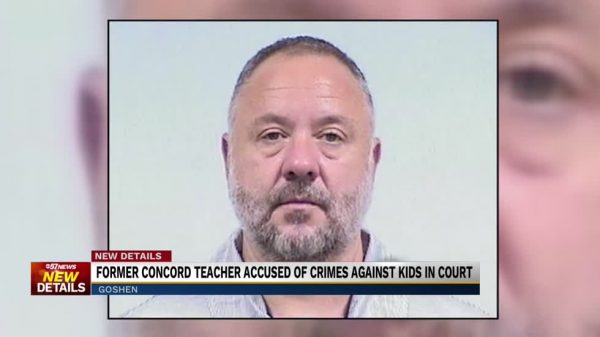 A former high school teacher in Elkhart, Indiana, who allegedly touched students during class time or asked them to touch themselves has been charged with over a dozen sex crimes. The students were in the 15 to 16 year age range. This was done during class time in front of the entire class.

According to the South Bend Tribune, Andrew Cowells, 47 was charged with 10 counts of possessing child pornography, two counts of child solicitation, two counts of voyeurism, two counts of battery, and one count of vicarious sexual gratification. This went on for a while before someone complained. WTH was he thinking? Some people should never be allowed near children of any age.

Cowells had been placed on leave last month and was officially fired on Monday. he had been placed on leave for “inappropriate comments of a sexual nature.” He had worked for the school for 17 years. It was not disclosed whether there were bad acts committed in the previous years. Many of the charges stem from May 5th when he asked students to touch themselves or to let him touch them.

A third student said Cowells told sexual jokes and asked “if anyone had the courage” to let Cowells touch them. Cowells then taunted the class for someone to volunteer and when the student stood up, Cowells touched the boy “from his shoulders to his butt[ocks].”

Cowells also took a group of male students into the boy’s restroom that morning. In the bathroom, Cowells touched one student.

Two other students said that Cowells tried to watch them as they urinated. Cowells tried to see their privates. How long before Democrats make this behavior legal because people like Cowells was born that way? Laugh if you wish, but I am only half kidding.

After obtaining a search warrant for Cowells’ phone, investigators reportedly discovered numerous photographs of underaged boys partially or fully undressed, some performing sex acts. None of Cowells’ students, however, were included in the photographs.

Speaking to reporters, Superintendent Dan Funston got choked up and he expressed anger over Cowells’ alleged actions.