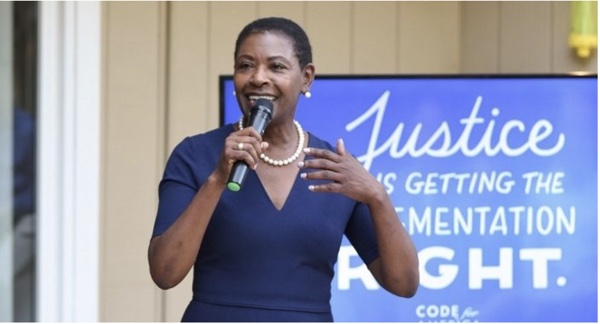 Flashback Sept 6 2020| Remember when the leftists’ lawlessness, looting, rioting, insurrection, and assault on police got so bad that California wanted to stop charging looters?  Well, we do, and these are the same people who now say that those of us on the right are dangerous ‘domestic terrorists’ for revering the Constitution … and, and the rule of law.

Law enforcement officers have to consider if looters “needed” the stolen merchandise before charging them, according to new guidance issued by leftist lunatic Diana Becton, the first-term Contra Costa County District Attorney supported by George ‘you know who,’ the far-left, anti American billionaire.

Just to show how whacked out she is, when a couple painted over the Marxist Black Lives Matter (BLM) message on the street in front of the Wakefield Taylor Courthouse, the office of the District Attorney in Contra Costa County, Becton, charged them with a “hate crime.”  Stealing is fine so long as the thief needed what he stole, but painting over a Marxist group’s propaganda message is a hate crime.  Only in the minds of Democrats.

Here’s the statement where the Contra County DA’ office charged the couple with a “hate crime.”  A hate crime!

BREAKING: The #Martinez couple caught on video painting over the approved #BlackLivesMatter mural on #FourthofJuly are being charged with a hate crime, according to a release from the #ContraCostaCounty District Attorney's office. pic.twitter.com/9L21byNsE1

How crazy is it that as looters are caught stealing things while BLM riots are taking place in the same exact county, Contra Costa County’s District Attorney has a completely different take on how to apply “justice.”  Rather than charging them with a felony, this you know who -funded DA is asking for police officers to consider if the looters “needed” the stolen merchandise before arresting them.

“Did you need that those twenty cartons of cigarettes you stole from the convenience store?”

“Okay, we’ll let you go this time with just a warning.”

Here’s a great example of looters who really needed to steal from a local business in Contra Costa County’s Walnut Creek shopping district.

Here’s photojournalist Jose Carlos Fajardo, who took to social media to provide a video of looters who really needed to steal from a local business in Contra Costa County’s Walnut Creek shopping district:

Diana Becton a first-term District Attorney, is one among numerous radical district attorneys supported by George ‘you know who.’  ‘That guy’ gives thousands of dollars in donations to get progressive leftist politicians elected in District Attorney races so that they can radically change the system from the inside.

We saw the same thing from radical ‘you know who’ -funded St. Louis Circuit Attorney Kim Gardner, who charged Mark and Patricia McCloskey for defending themselves with legally owned firearms after a BLM mob broke through a locked gate and stormed onto private property during a riot.

Then there was Chicago’s Kim Foxx, the State’s Attorney for Cook County, Illinois, another ‘you know who’ -funded radical progressive who out of the blue just dropped the Jussie Smollett hate crime hoax case against the actor/singer who apparently setup his own hate crime causing all kinds of racial tensions across the country, not to mention costing Chicago police thousands in overtime pay to solve the hoax.

According to RedState, as quickly as Becton took over as district attorney, she carried out major changes in the way the office was run and in how crimes were charged and how aggressively cases have been prosecuted.  One recent change has to do with charging people for “looting,” which is basically stealing during a state of emergency, you know, like a riot?

Would it shock you to learn that Becton is close friends with Gardner and Foxx?  This week she co-authored a Politico op-ed with Gardner, Foxx, and two more ‘you know who’ -funded radical progressive DA’s explaining their leftist philosophy and 11-point plan to fundamentally destroy American cities.

In California, a looting charge essentially increases the severity of a burglary or theft charge if it occurred during a State of Emergency.

Under Penal Code 463 PC, California law defines “looting” as taking advantage of a state of emergency to commit burglary, grand theft or petty theft. Looting charges can be filed as a misdemeanor or a felony and is punishable by up to 3 years in jail.

Even without any State of Emergency declared after the Black Lives Matter riots started in various California counties, the entire state has been under that declaration since March 4, 2020, when Gov. Newsom instituted a State of Emergency over coronavirus.

In order to promote consistent and equitable filing practices the following analysis is to be applied when giving consideration to filing of PC 463 (Looting):

a. Factors to consider in making this determination:

i. Was the target business open or closed to the public during the state of emergency?
ii. What was the manner and means by which the suspect gained entry to the business?
iii. What was the nature/quantity/value of the goods targeted?
iv. Was the theft committed for financial gain or personal need?
v. Is there an articulable reason why another statute wouldn’t adequately address the particular incident?

Do you see what they’re doing?  A state’s primary duty is to protect their people and private property, especially during a state of emergency.  Yet, these radical progressive Marxists in power are trying to give criminals a pass, and during a critical time for a community.  So, they want cops to have to look up a chart to see if they should arrest people who steal that will consist of them evaluating the thief’s psychological and financial status beforehand.  Do they not realize these types of dopey rules will be a magnet for theft?  A riot breaks out and criminals jump for joy, because Christmas came early.