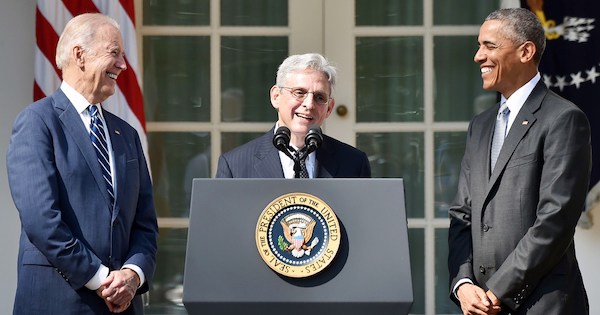 If you remember the name Merck Garland it’s because he’s poor fella who Barry nominated for Scalia’s vacant Supreme Court seat … that Mitch and the boys in the Senate froze out.

I hate to give Mitch any credit because he’s about as trustworthy as a hungry crocodile, or a Biden around a … new mind, but at least held the line on the Supreme Court seat.

Well, seeing as ‘hell hath no fury like a Democrat scorned’ Obama and the CCP’s puppet in the White House, you know, ‘The Big Guy’, is going to try to get a now bitter as hell Merek Garland confirmed as the Attorney General.

His first order of business (assuming enough RINOs Cuck and accept the dismemberment of what America is as the official policy of the Democrat control DOJ) is going to be going after Trump supporters.

I wonder if John Sullivan, one of the BLM/ radical leftist and Trump hating instigators who lead the mob into the Capitol Building will be one of those ‘White Supremacists’? … My Magic 8 Ball says ‘Not Likely’.

President Biden’s attorney general pick Merrick Garland cited the critical work of prosecuting pro-Trump rioters who stormed the Capitol on Jan. 6 and said “we do not yet have equal justice” in the U.S. in testimony prepared for his confirmation hearing.

Garland’s opening statement was released ahead of his Monday appearance before the Senate Judiciary Committee.

If confirmed, I will supervise the prosecution of white supremacists and others who stormed the Capitol on January 6 — a heinous attack that sought to disrupt a cornerstone of our democracy: the peaceful transfer of power to a newly elected government,” Garland’s opening statement reads. “That critical work is but a part of the broad scope of the Department’s responsibilities.”

Biden introduced Garland as his nominee for the role of attorney general on Jan. 7, one day after pro-Trump rioters stormed the Capitol as lawmakers met to confirm the president’s election victory. In a press conference at the time, Biden presented Garland’s nomination as an essential step to restore the rule of law.

Garland will also discuss his “urgent” mission to uphold all Americans’ civil rights after a summer of racial justice protests in the wake of the death of George Floyd.

“That mission remains urgent because we do not yet have equal justice,” Garland’s opening statement reads. ‘Communities of color and other minorities still face discrimination in housing, education, employment, and the criminal justice system; and bear the brunt of the harm caused by pandemic, pollution, and climate change.”‘

Uh, what?  Climate change … you know, formerly called ‘the weather’ effects people with darker skin more than people with less melanin?  Can someone explain this one to me, and how the Attorney General is going to litigate a solution to minorities and their unfair … weather?

By the way, I’m 50% from Jewish ancestors … does that make me a White Supremacist?  Or is there some special evil Jew thing I fall in to?  I know the left tells up both Jews and White folks are evil, so it’s not like a parlay is it?  Last thing I need is to be a 4x bad guy because of the nature of my genetics.  The fact we are doing this math is a pretty good indicator that these policies are …. yup, RACIST!

What a clown world.